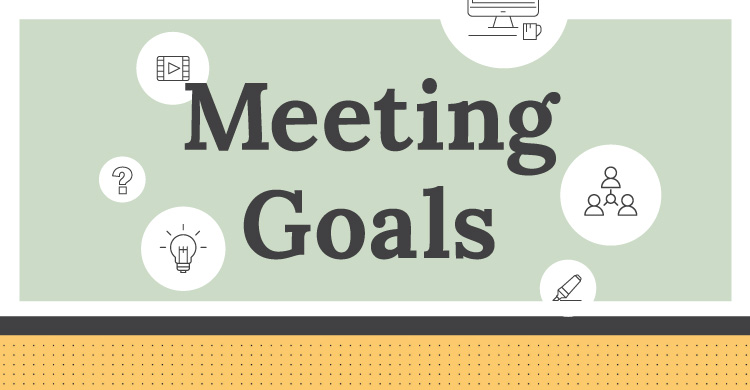 In our first and second posts in this series on Meeting Goals, we lasered in on the first four hours of an agenda with a group of newly-hired principals. In this last post, we share our intentions for the afternoon’s learning.

After lunch is a complicated time to teach K-12 students. I venture it can be downright dangerous to work with adults after lunch! Using a kinesthetic experience with high engagement and interest (of course, with a clear connection and purpose to the agenda) is a standard practice in many of our day-long agendas.

As we thought about this first day, including an experience with significant stress relief seemed important. Although it was still early in the year, these principals had been working at their schools for two months. Many of them had experienced radical life and family changes as a result of their new position.

During the debrief of Balloon Bounce, we made connections to not only how we are prioritizing certain pieces of our work (the earlier rank ordering during the morning session), but also helping staff to prioritize. The last round proved to be an opportune time to discuss the peril of doing all the work of school improvement by yourself.

Be sure to read the “What Happened” column in Table 7.

We had chosen two presenters who both expressed “6” as their urgency scale. Lori and Misty had sat in the presenter chair before so were aware of their job responsibilities. When they arrived back from lunch, we asked if they had a specific dilemma-based protocol in mind. Neither had a preference, but when asked, both wanted to leave with a few ideas. We chose to use Descriptive Consultancy for each of the sessions. In later months, we noticed Descriptive Consultancy became a default, and written reflections noted a pattern indicating that specific protocol may not have always been the most informed choice. We then secured learning for the group to learn more about all four of the foundational protocols in that family.

However, for today’s agenda, Descriptive Consultancy worked well for both groups, as listed in Table 8. Lori and Misty both gave a 1-2 sentence description of their respective dilemmas, and their colleagues chose which part of the room where they felt they could best contribute.

Throughout the day, we kept reminding them, “That might be perfect for your mentor follow-up list.” In speaking to the principal mentors prior to this first session, they had mentioned very few of the newly-hired principals had a list of questions/items to discuss with mentors. While the mentors had targeted topics to discuss with the principals, they also wanted to function as thought partners and felt like the principals were not really sure how that relationship might look. During the closing, this was one last-ditch effort to ask participants to build or add to this list of items on which they could use their mentor as a thought partner.

As previously mentioned, it was important these learning sessions were responsive to their needs. The session assessment method we tried on this first date worked so well we continued it throughout the other sessions. Principals were asked to address the three questions listed in Table 9 on index cards.

The next three gatherings with this group (November, January, March) continued a similar trajectory. Some structured protocols from this book were included in future agendas ( Chalk Talk, Connections, Defy Gravity, Gap Analysis, Microlabs, Planting the Seed, Text Rendering,). At their request, each afternoon was spent in small groups, examining dilemmas they were experiencing at their campus (Consultancy, Descriptive Consultancy, Issaquah, Peeling the Onion).

However, every moment was not spent using a discussion protocol. For instance, some direct instruction occurred. In the second meeting, we showed participants how to create sociograms of their faculty members. They then set 1 day/1 week/1 month plans of how to use that graphic toward leveraging relationships with staff in their campus improvement plan efforts.

Well-intentioned educators can sometimes go overboard once they learn about the power of discussion protocols. Simply doing protocol after protocol in a meeting does not create effective adult learning. In fact, a vomit of protocol after protocol can become sickening to participants. Instead, when used judiciously and with clear purpose, the habits and dispositions participants demonstrate in discussion protocols become the way a group works. Sometimes these are demonstrated within the constraints of a particular protocol, other times participants demonstrate these behaviors in a general conversation or an informal collaboration. In these moments, protocols can transform (Kersey, 2014).

Not too long ago, I was asked to write a piece about how leaders and teams can determine if they really are working in an accountable professional learning community. This is a real issue, as possibly the biggest roadblock to helping all students learn at higher levels and doing the work of a PLC is when an organization gets caught in “PLC Lite.” PLC Lite is defined by Dr. Richard DuFour and Dr. Douglas Reeves as “when educators rename their traditional faculty or department meetings as PLC meetings, engage in book studies that result in no action, or devote collaborative time to topics that have no effect on student achievement—all in the name of the PLC process” (DuFour and Reeves, 2016, p. 69). END_OF_DOCUMENT_TOKEN_TO_BE_REPLACED