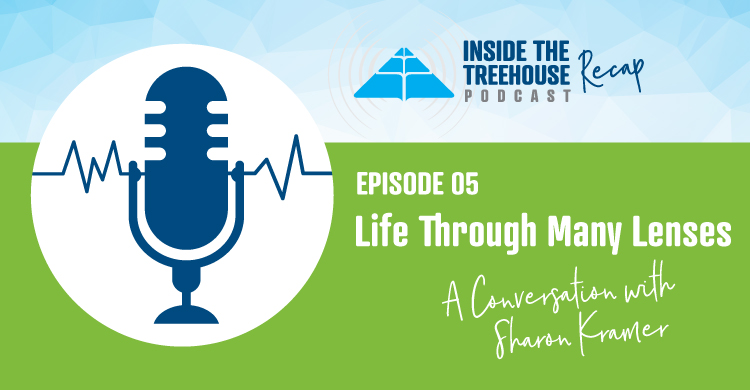 Dr. Sharon Kramer is known nationwide as an author and expert in assessment, school reform, and professional learning communities. During Episode 5 of Inside the Treehouse, Solution Tree CEO Jeff Jones sat down with Kramer for a great conversation about her life and love of education.

One of Many Firsts

Born and raised in the Chicagoland area, Kramer is the daughter of restaurant owners. Her half-Italian, half-Greek ancestry comes from the fact that both her parents were immigrants. Despite her illustrious career in education, neither of Kramer’s parents graduated high school. Surprisingly, no one else in her extended family did either, making Kramer the first person in her entire family to graduate high school, let alone college.

While her family didn’t necessarily value higher education, Kramer did. In fact, as a second-grader, Kramer knew she wanted to become a teacher. Impactful teachers and an interest in education led to her “breakthrough” moment—at the young age of seven. To this day, her desire to help kids and to provide them with opportunities to find their breakthrough moments guides her practice.

After high school, Kramer went to college at Northern Illinois University, which was a teaching college at the time. With no money to her name and only a bit of assistance via scholarship, Kramer went straight to the bank as a freshman and got her own loan. Working two to three summer jobs to make her way through, Kramer was driven to succeed. Growing up, Kramer was always told by her father that she could have anything she wanted, as long as she put in the work for it. This was one lesson that stuck. A bachelor’s degree, two master’s degrees, and one PhD later, Kramer’s dedication and persistence have paid off.

Kramer began teaching after earning her undergraduate degree, working toward all her other degrees while employed. Her first classroom experience started at Waukegan Public Schools, a large, urban, underperforming district between Chicago and Milwaukee. There, she went from student teacher to second-grade teacher, then on to middle and high school teacher. Kramer was even a cheerleading coach along the way. Her next move was into the director of elementary education role. With 23 years of service in the same school system, Kramer likes to say she “cut her teeth” in Waukegan.

Lessons Learned Along the Way

Her hard work only led to more opportunities, as Kramer began her run as assistant superintendent within multiple schools and districts, one of which was Kildeer Countryside School District. In this position, she ensured all students were prepared to enter Adlai E. Stevenson High School, a Model PLC created by Rick DuFour.

While working for ten superintendents throughout her career, Kramer realized that everyone is different and has different ways of doing things. She learned that it’s important to take a step back, put on the glasses, and look at life through many lenses. Her long-standing career working with all types of schools also taught her that all kids can learn.

A Soft Spot for Priority Schools

Besides being a PLC and assessment expert, Kramer has done plenty of professional development and consulting throughout her career. Through this, she found a niche (and soft spot in her heart) for priority schools. Kramer has come to love going in, boots on the ground, to work with severely underperforming schools, such as those suffering from dropout problems, those with D or F ratings, and even those that were once high-performing but are now taking a downturn.

The first place Kramer went to do priority work, she stayed for seven years. When working with the lowest-performing high school in Oklahoma, she stayed for three years. The fulfillment Kramer gets from improving these schools, as well as bringing both their teachers and students hope, is unbeatable.

Accelerated Learning and a Culture Shift

She has found that learning needs to be accelerated for kids in priority schools. Kramer even believes that these acceleration strategies could be used to help lessen the achievement gap facing all kids today due to the pandemic.

While there may be fewer assessment standards to meet these days, the level of rigor to succeed is higher. This takes longer to teach and to learn. Kramer believes the answer is focusing on the “big rocks” of conceptual learning, which can be transferred to all kinds of standards. This will accelerate learning.

When she goes into a priority school, Kramer takes a problem-solving approach to greater achievement. Of utmost importance is leading these schools out of a culture of failure to a culture of success.

A shining example of how hard work pays off, Dr. Sharon Kramer has had a great career, and she’s not done yet. For her, it’s more than just improving grades, it’s saving lives.

Subscribe and listen to the full episode on your favorite podcast app.

Tune In to Our Next Episode

Episode 6 of Inside the Treehouse will be available on December 18, and will feature Mike Mattos. Tune in to hear his amazing story and always sage advice.

Not too long ago, I was asked to write a piece about how leaders and teams can determine if they really are working in an accountable professional learning community. This is a real issue, as possibly the biggest roadblock to helping all students learn at higher levels and doing the work of a PLC is when an organization gets caught in “PLC Lite.” PLC Lite is defined by Dr. Richard DuFour and Dr. Douglas Reeves as “when educators rename their traditional faculty or department meetings as PLC meetings, engage in book studies that result in no action, or devote collaborative time to topics that have no effect on student achievement—all in the name of the PLC process” (DuFour and Reeves, 2016, p. 69). END_OF_DOCUMENT_TOKEN_TO_BE_REPLACED