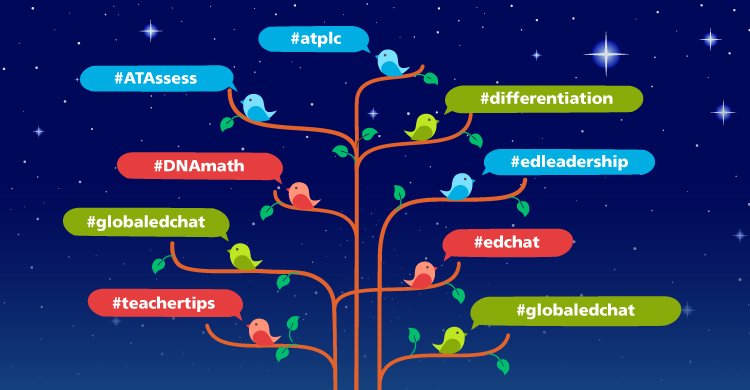 I am reading the fascinating book Thank You for Being Late: An Optimist’s Guide to Thriving in the Age of Accelerations by Thomas L. Friedman, the author of The World is Flat. The title of chapter 2caught my attention and inspired this blog post. The title is “What the Hell Happened in 2007?” Let’s say a lot. The first iPhone was released, Facebook reached the masses a few months before, Android was introduced, the Kindle arrived, and a chapter filled with more. Thrown into 2007 was the platform Twitter.

Last week, I taught two educators how to use Twitter professionally, and after our session, I started to reflect on my Twitter experience over the last decade. I started by searching for my Twitter birthdate at the website Tw Birthday. For the record, I was born on November 2, 2007 and a have a digital certificate to prove it. 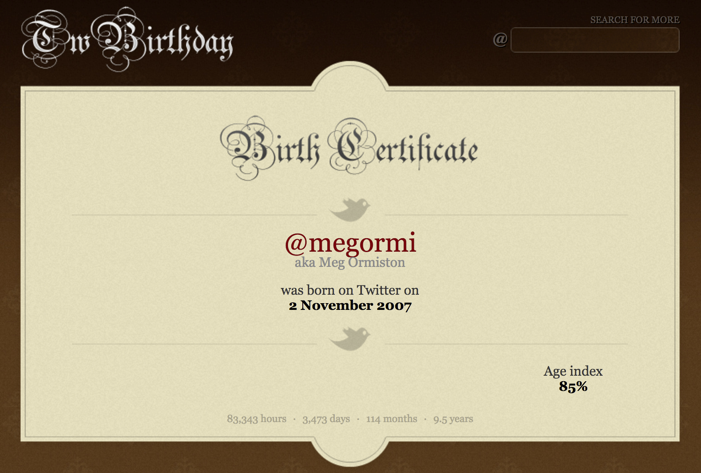 I remember the day I signed up for Twitter, because I was shamed into it by a friend and fellow consultant, David Jakes. We were waiting for a flight in an airport, and David said to me “If you don’t Twitter or Skype, how do you grow professionally every day?” Ten years later, I still can hear him saying that to me, and I stood there thinking, I don’t have time for another distraction in my life. I had two boys in middle school, a new puppy, and was busy with work. Twitter was not for me; I was certain of that, but I created the account and tried to learn the how. I figured out the how of Twitter, but it took me a few months to figure out the why of Twitter.

When I teach about Twitter as a communication platform everyone needs to know, I often share this story:

I remember working from home in 2009 as the news story broke about how Captain Chesley “Sully” Sullenberger made a successful emergency landing on the Hudson River. I did not have the radio or television on, but my Twitter feed suddenly started to move really fast, and I quickly tuned in. One of the first tweets was from a man who was on one of the ferries rushing to the rescue. His cell phone pictures, attached to the tweet, immediately went viral on Twitter. I flipped on the television and tried to watch the breaking news. They had audio from someone on the ferry, but they could not get cameras to the scene immediately. As the successful rescue unfolded, I remember thinking the world of journalism has changed forever, making us all reporters of news. Without Twitter, it would have been hours before I heard about the miracle on the Hudson.

The two teachers I worked with had never thought about the why of using Twitter professionally, but after this story, they wanted to try. They asked for help in 2017 because they felt everyone was tweeting; it was time for them to learn. Before I taught them the mechanics of retweeting and posting, I showed them how I use Twitter for personal professional development. Suddenly, they clearly saw the why and were ready to dive in.

For me, the why didn’t happen until 2008, when I started using the app Tweetdeck to organize and view my Twitter activity. I still use Tweetdeck and a similar app, HootSuite, to organize the digital clutter. Without these apps, I would have given up on Twitter years ago, I like to call them the secret sauce of Twitter. Sharing my Tweetdeck view with the teachers helped them to see the purpose of Twitter for educators. 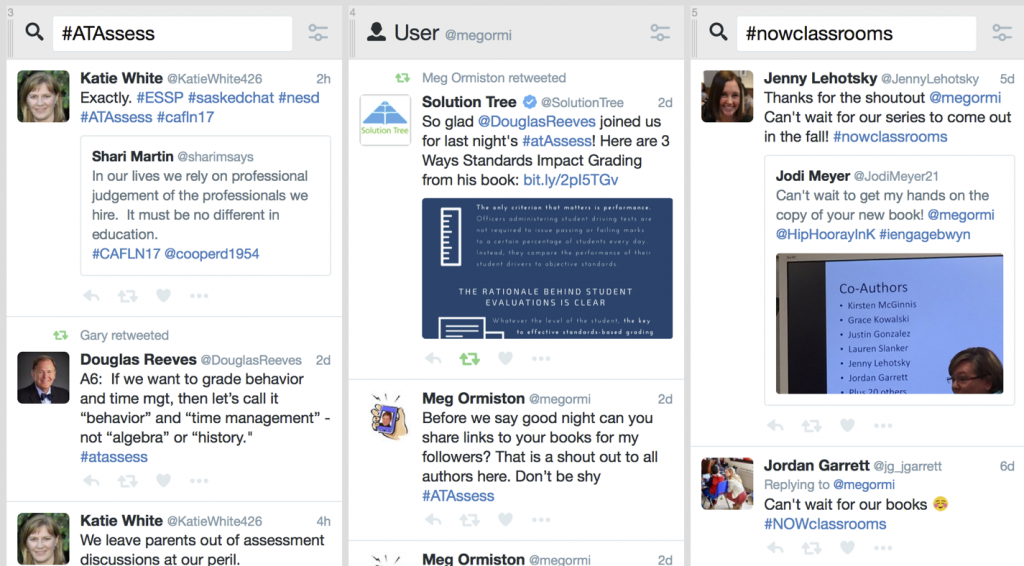 These educators were ready to get to the how and start organizing their Tweetdeck environment. Accounts were made, and then the search for hashtags and users began. I loved when they started to search for authors and discovered many of them were on Twitter and generously sharing their work. The next strategy was to look at the author’s followers to find other educators they could follow who shared their passion for for all things assessment.

The next step was identifying different chats they could participate in around assessment. I pointed them to the #ATAssess hashtag, and they were actually giddy when they saw the names of some of the authors who participate in that specific arena. Being the geek I am, I went a step further and showed them how to access past chats through the archives. They both agreed to join the next chat, and I told them I would also participate to help them out.

This session was rewarding for me because I successfully pulled two more educators into the web of personalized professional development. From current events to the best practices in education, my ten years on Twitter have helped shape who I am as an educator, presenter, and author. I now use the Twitter platform to grow professionally every day—connected with passionate educators from across the globe, thanks to David Jakes @djakes. Yes, you were right! 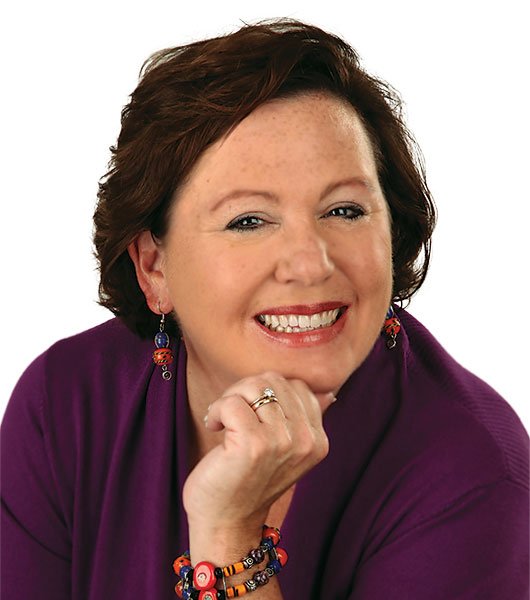 Meg Ormiston, in her role as a consultant, partners with school systems that have committed to 21st century learning experiences for everyone. Meg creates a unique partnership in each district, reflecting the mission, vision, and direction that local leaders identify.

Not too long ago, I was asked to write a piece about how leaders and teams can determine if they really are working in an accountable professional learning community. This is a real issue, as possibly the biggest roadblock to helping all students learn at higher levels and doing the work of a PLC is when an organization gets caught in “PLC Lite.” PLC Lite is defined by Dr. Richard DuFour and Dr. Douglas Reeves as “when educators rename their traditional faculty or department meetings as PLC meetings, engage in book studies that result in no action, or devote collaborative time to topics that have no effect on student achievement—all in the name of the PLC process” (DuFour and Reeves, 2016, p. 69). END_OF_DOCUMENT_TOKEN_TO_BE_REPLACED