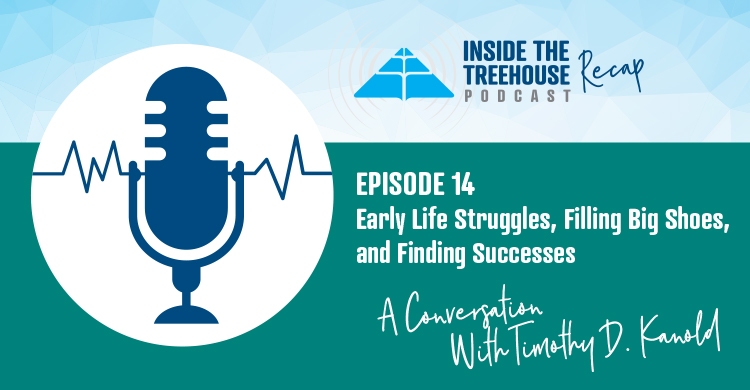 Read on to discover how Tim overcame the challenges of his past and to learn more about the key mentors who helped shape him into the writer and leader he is today.

Formative Experiences
Educators become interested in the field for many different reasons. For Tim Kanold, he can point to his early school experiences as the reason he felt drawn to a career in education. After spending nine months out of school and homeless at age seven following his parents’ divorce, he went to live with his aunt in Rock Island, Illinois. There, he was placed in third grade, where he found himself struggling.

While looking for a solution to Tim’s learning difficulties, his teacher and aunt had his hearing tested—and discovered he was deaf in his right ear. He was quickly moved to the front of the classroom to help him hear better, and almost overnight he became a good student. This experience, along with some inspiring teachers and coaches in high school, showed him the power of teaching and piqued his interest in education.

The Path to Becoming a Teacher
Fresh out of college, Tim accepted a teaching position in rural Illinois. Because he was the only math teacher in the school, teaching all math classes for grades 6–12, the experience proved isolating and difficult. He also became gradually aware that he still had a lot to learn before he could be a truly great math teacher. He chose to attend graduate school in order to build his knowledge and skills.

Afterward, Tim found himself at a crossroads. He was offered a job in Bell Labs in suburban Chicago, where he would’ve made three times the salary of a teacher. Down deep, however, Tim knew that teaching was his life’s calling. He walked away from the big-salary job, accepted a teaching job in West Chicago, and the rest is history!

Trust the Process
Throughout these early teaching experiences, Tim developed a philosophy that he continues to carry with him: If you let opportunities come to you, focusing your energy not on pushing toward the future but instead on being the best you can be in the present, then success will find you.

As a teacher in West Chicago, he was approached by his colleagues to help with a textbook-writing project, a task that ended up being—in his words—“the worst job in the world.” He had to write a complete solution set for every single problem in an Algebra II textbook! But because he persevered and focused on performing to the best of his ability, more writing opportunities came his way, leading to the flourishing of his career as an author of first math textbooks and then professional development texts.

Following Rick DuFour
After becoming superintendent of Adlai E. Stevenson High School, a position previously held by Rick DuFour, Tim felt some pressure to live up to Rick’s great legacy. But because Rick had mentored Tim so effectively before stepping down and because Stevenson had such a firmly embedded collaborative culture that embraced change, Tim also felt confident that he could succeed.

And succeed he did. Under his leadership, Stevenson soared to even higher heights!

Heart and Soul
Inspired by his long-time passion for professional wellness, Tim wrote the popular book HEART! to re-inspire and remind educators of the significant impact their work has on their students and the world. This was a book he’d been wanting to write for 10 years, and with the support of Solution Tree Press, it was finished and published in 2017. He took a lot of risks with the book, but they’ve more than paid off. He’s been contacted by educators around the world who’ve been deeply touched by HEART! and he’s very proud of what he’s accomplished.

After seeing how HEART! resonated with readers, Tim still felt like there was more he had to say. So he wrote a companion book, SOUL! Educators, he believes, have a moral responsibility to create good in the children they serve, and it’s this idea that is central to SOUL! Tim invites readers to find the good in themselves in order to create good in others—which is certainly a very worthy goal!

Tim also shares several personal tidbits in this episode, including that he plans to run the Chicago Marathon this coming fall. We wish him the best of luck!

New Episode Coming Soon
Tune in to Episode 15 of Inside the Treehouse on May 21. Get ready for an inspiring conversation with Eric Twadell.