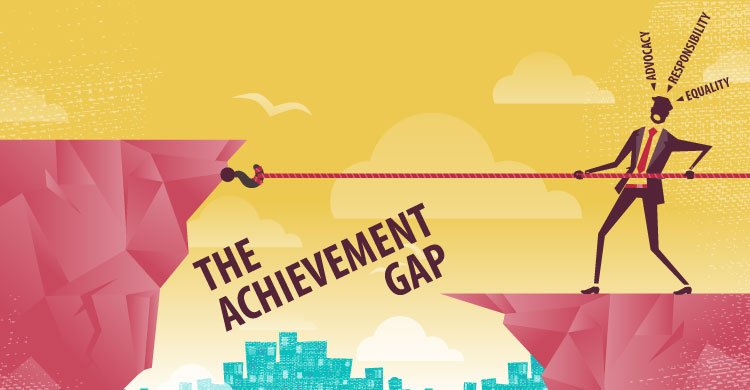 It is clear that the paths taken in the past to close the achievement disparities in American public schools, also known as the Achievement Gap, have not been effective. Despite billions of dollars dedicated to achieving the goal of academic equality in every public school, the gap still remains, and it is as large as it has ever been. We should not be able to predict student success in school based upon factors like race, income, and home language. So, what will it take to close this stubborn gap?

A change in mindset is in order. We have to acknowledge that as much as professionals and politicians discuss the issue of equity in school, there are some communities that enjoy the benefits of outperforming other school systems. Many view this advantage as an asset. Real-estate values and population shifts can partly be connected to performance of local schools on state and national exams (Frankenberg & Orfield, 2012). Americans love the concept of equality, but the evidence shows that they do not always embrace the reality of equality. Understanding this reality, schools that struggle to perform have to take on the task of improving themselves, because there is very little external desire to close the gap; in fact, many communities benefit from it.

Change will require a liberation mindset, which in turn will create liberating cultures that will properly serve all students. Liberty is the right of every human being, and just like equality, liberty is identified in the United States Declaration of Independence as a guarantee, alongside the right to life and the pursuit of happiness. The liberation mindset is an unwavering set of collective beliefs and actions rooted in the goal of achieving high levels of academic and social success for all students, despite internal or external barrier.

There are three main characteristics of the liberation mindset:

Leadership at all levels will be important in championing this mindset and organizing the policies and resources necessary to move from beliefs to actions. Schooling requires profound contributions from a lot of people, and leadership is needed at many levels, including the classroom, principal’s office, central office, home, community, and in the legislative chambers. But when it comes to leadership in changing mindset and culture, school leadership, especially the principal, becomes very important in this endeavor. “The school principal is in the best position to change the important behaviors and habits of a school” (Usdan, McCloud et al., 2000).

Schools that develop the liberation mindset do not view internal and external obstacles as insurmountable; they view them as challenges and opportunities for growth. They do what many perceive as impossible. They embrace an egalitarian belief system, and they possess superior professional skill. The recognize that students are not at-risk, but as Dr. Yvette Jackson describes, school dependent (Jackson, 2011). They believe that with the right guidance, resources, and enough time, all students can become academically and socially successful.

Not too long ago, I was asked to write a piece about how leaders and teams can determine if they really are working in an accountable professional learning community. This is a real issue, as possibly the biggest roadblock to helping all students learn at higher levels and doing the work of a PLC is when an organization gets caught in “PLC Lite.” PLC Lite is defined by Dr. Richard DuFour and Dr. Douglas Reeves as “when educators rename their traditional faculty or department meetings as PLC meetings, engage in book studies that result in no action, or devote collaborative time to topics that have no effect on student achievement—all in the name of the PLC process” (DuFour and Reeves, 2016, p. 69). END_OF_DOCUMENT_TOKEN_TO_BE_REPLACED