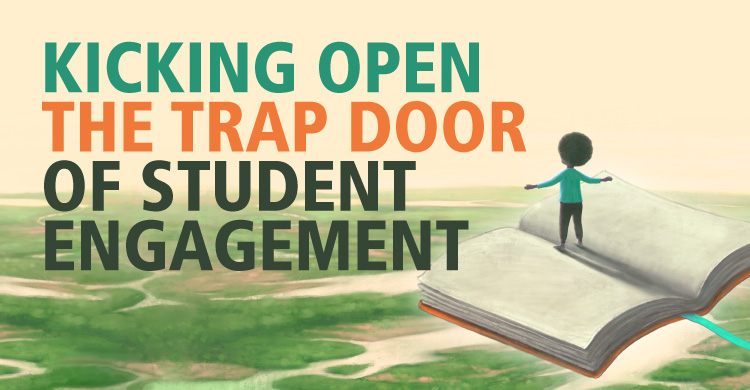 On a recent visit to a school, I listened to a student who complained to that everything that he was asked to do by his teacher was boring. When I asked him what he would like to learn about, he promptly responded, “Something interesting, like maybe something about dragons!”

My heart went out to him, for autobiographical reasons. It was the dragon Smaug in J.R.R. Tolkien’s The Hobbit who lured me to take on the massive Lord of the Rings trilogy, and that gave me a new identity as a person who read for pleasure. Decades later, I still find one of my greatest joys in life entails reading a new novel, preferably about people who expand my horizons and keep me turning page after page, as I try to anticipate just what is going to happen next.

What is the process through which a young person comes to fall in love, not with a person, but with an activity? What keeps some people going back again and again to a wicked problem, staying up late at night, and driving themselves (and others) slightly crazy in the process? Alternatively, what is it that stops people from finding a passion that can give their lives meaning and purpose, and is captured in the contemporary phrase, “failure to launch?”

These are the questions that compelled Andy Hargreaves and me to write our new book entitled Five Paths of Student Engagement: Blazing the Trail to Learning and Success. We wanted to find the trap door that can help students escape from apathy or antipathy to become fascinated and fascinating lifelong learners. What is that trap door, we wondered?

The quest
Admitting that we didn’t know much about the topic, we began by tackling the 840-page Handbook of Student Engagement to get an overview of what researchers already had found. A problem surfaced, however. Reading about student engagement was boring!

The reason, we found, was that its chapters were all written by psychologists with narrow research agendas. Their controlled laboratory settings couldn’t have been more remote from the hustle and bustle of a classroom full of youngsters that teachers have to work in. Psychological perspectives would need to be supplemented with sociological insights to understand how schools work in real life, we found. What can be done to use the rich social environment of a school to help young people to be engrossed with learning? That is the practical question that busy educators want answered.

This refined line of inquiry meant that we had to take on the challenge of integrating psychological with sociological approaches to student engagement. In the process, we began questioning popular slogans that trip educators up from time to time. For example, we’re told that education needs to be more socially relevant—but it’s not clear how weird creatures like dragons, unicorns, and dinosaurs that young people find fascinating are relevant, at least in the everyday use of the term. Or we’re told that learning needs to be fun—which falls apart when you see how absorbed young people can be when reading the tragic Diary of Anne Frank or studying the horrors of the Atlantic slave trade. Or we’re told that we need to do more to jazz things up with technology, ignoring the research that shows that what young people need these days is more time outdoors to appreciate the wonders of nature and to attain peak physical fitness. Or we say that we need to make school more intrinsically interesting, as though there is something wrong when young people hope that their educations will help them attain the extrinsic rewards of jobs that meet their needs for food, shelter, and clothing.

What do we need to do to open the trap door of student engagement, then?

Creativity
First, our schools need an infusion of a sense of the creativity and magic of learning. Recently I was watching toddlers building sand castles at a local beach. They were mesmerized with building something so malleable with their own hands. It reminded me of how enthralled students are in any well-designed class. It’s instantly recognizable when they have opportunities to become physically involved in an intriguing laboratory experiment, for example, or when acting out a suspenseful murder scene in an English language arts classroom.

Connection
Second, students need to feel a connection to what they’re doing—that it has real meaning and purpose for them. As part of the research for our book, Andy and I visited a school in Idaho where students were studying the growing use of drones in agriculture. Since many of their parents owned or worked on farms that had purchased drones and were trying them out, students were aware of both potential benefits accrued through better crop oversight and yield, as well as the challenges of learning how to navigate remote control devices on cell phones. The students were learning to write argumentative essays that argued for or against drones that they then shared with peers in rural schools in other states. These students knew exactly what they were learning in schools and why it was important to them.

Third, students need to feel a sense of belonging, through friendships with their classmates and attachment to their teachers. At Boston College, I often work with student athletes who tell me they felt like academic failures in their schools, but found they were second to none on the basketball court or the football field. There are many things to criticize in US schools, but whatever we do going forward, keeping athletics and the performing and visual arts as valuable sources of identification with school must remain at the top of our priority lists.

Empowerment
Fourth, we all want to have a feeling of empowerment in school and society. When I entered high school there was a last spurt of 1960s idealism still alive in the curriculum design of the public schools of Fairfax County, Virginia. This allowed students who were fulfilling area requirements in the History and English language arts departments to choose units of study for 9 weeks that were offered by the roster of each department’s teachers. This meant that when I was just a ninth grader, I was being treated like a college student, who could be trusted to make good choices about what I wanted to learn, based on my interests at the time. It was so liberating to be able to select a broad array of topics from the rhetoric of social protest, to the plays of Shakespeare, and then to have the chance to dive deep into them, before switching to another teacher for another 9-week section on something completely different.

Ownership and mastery
Fifth, there seems to be an innately human quest to develop a feeling of focus and mastery at something, that schools should encourage. Today three-quarters of American adults say that they are addicted to their cell phones, meaning that we now live in a state of “continuous partial attention.” But did anyone ever become outstanding at anything while managing a variety of other activities all at once? We can help our students by giving them challenges that are so enthralling and demanding that they can learn the fulfillment that can be derived from fully devoting themselves to excellence in one single domain or undertaking. It’s almost irrelevant at the outset what that particular pursuit is—whether it is in mathematics, astronomy, or geography, for example. What matters is that students come to see themselves as people who have the patience and the stamina to take on something difficult, and then to drive their studies through to closure in a way that others will acknowledge the attainment of excellence in the final product they’ve created.

Picture a wheel with five gears, all working together to develop momentum and purpose. Picture the classroom teacher as a consummate professional overseeing and coordinating that gearwork for a full class of students, with a range of idiosyncratic interests and abilities. Then imagine lifting up that image so it’s what we find in every nook and cranny of every school and system. It’s a daunting task, to be sure, difficult to attain, but inspiring nonetheless—and precisely what is needed to kick open the trap door of student engagement!
.