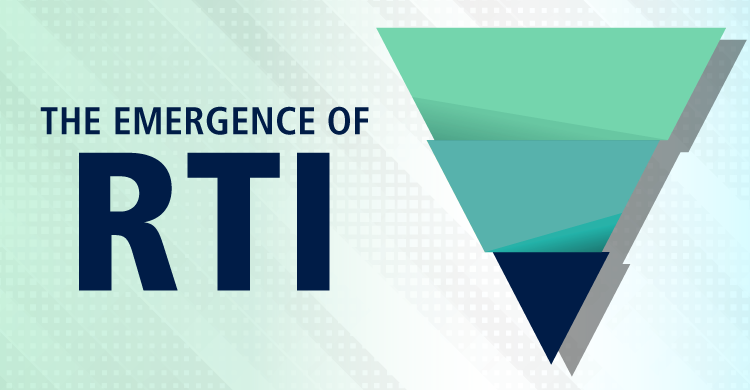 During the summer of 2005, I recall helping my sister set up her fifth-grade classroom. A new school year was rapidly approaching in the central Illinois school district. We were discussing my role as an education consultant, now supporting educators in the areas of the professional learning community (PLC) process, assessment, and response to intervention (RTI). Her response: “Don’t talk to me about RTI; it’s a documentation nightmare! I spend all my time monitoring students and documenting their achievement. It’s hindered my teaching.” In many school systems, educators continue to feel burdened by the policy of RTI and fail to understand the emergence and purpose.

The birth of RTI in 2004 raised the level of concern as school districts switched from a discrepancy-based model of identification—typically biased toward student failure—to a prevention model of support during the learning process. Though the process of student support was changing, the fear of not knowing the type or proper documentation was left at the schoolhouse door in many school systems during this important transition. The failure-based model centered toward documenting a student’s learning versus addressing the learning needs of students was at stake.

Documentation was a key component associated with the Individuals with Disabilities in Education Act (IDEA) of 1975 and PL-94-142, as lawmakers struggled to identify an effective identification process of students with disabilities. Upon the inception of IDEA, a discrepancy evaluation model was implemented to determine which students were eligible for special education. The model determined if there was a mismatch between a child’s intellectual ability and his or her progress in school. As educators applied this model, they were waiting for kids to fail. Once a student failed, we could determine if there was a difference between performance in the classroom and a student’s cognitive ability, once again measured on a test.

Unfortunately, students were overdiagnosed, and special education numbers were multiplying at an uncontrollable rate with overidentification of students. Moreover, the President’s Commission of Excellence in Special Education report in 2002 found that children placed into special education failed to close the achievement gap compared to their peers who were non-special education–identified (Kauffman 2004).

The reauthorization of IDEA in 2004 to the Individual Disabilities Education Improvement Act (IDEIA) allowed schools to transform learning for all students through the establishment of the response to intervention (RTI) process, therefore making the shift from a model of failure (waiting for students to fail) to a model of prevention (offering extra support during the learning process).

With the emergence of the RTI process, a fundamental question drives our focus: can students learn without interventions? If interventions are defined as additional time and support, educators value the process of identifying student needs to support learning versus failure on a prescribed test or grade in a course. Prior to RTI, the focus of student support was based upon the symptom indicating that students failed to master specific concepts or skills. With the switch to a preventative model of support, interventions became focused on the cause of the students’ difficulty or why the students aren’t learning or struggle with a specific skill.

The answer to the prior question is no; students and adults alike struggle to learn without interventions. Individuals may learn some things without intervention, but do we learn everything and do we learn at a high level of proficiency to carry forward for mastery? For me, I struggle to learn the first time and, on some occasions, I definitely need a lot more time on foundational skills.

This was true not only in the classroom but on the athletic field as well. In essence, it’s what coaches and athletes do to be effective: diagnose an area of need and provide additional practice time to master the desired skill or content. With a quick diagnosis practice, time can be adjusted, players can receive the additional feedback, and mastery is achieved. Rarely, if ever, have I experienced a coach, band director, or performance-based teacher provide a gamelike experience or base the entire athletic or activity practice on a scrimmage or perhaps a simulated concert or performance event to diagnose the needs of individuals within the group.

Documentation is not a lengthy test or summative performance. The goal is to achieve and win the game, perform the concert, or paint the picture in art class. Therefore, interventions are immediate during instruction, to strengthen confidence and success of students. Frequent feedback based upon formative assessment information (both informal and formal) guides and directs the intervention support, based upon the cause or need of the student. Often, if the student fails to master the concepts after classroom support, additional time is needed once again. The tiered RTI model provides increased support as needed with increasing the intensity (time and frequency) to help students master key concepts.

As educators, we recognize the need to shift toward effective practice from popular practice experienced with the inception of IDEA. We’re constantly reminded that effective RTI has a yearly impact of 1.29 standard deviation gain (Hattie 2016). As Hattie (2009) reports, 1.0 standard deviation is typically reported as two to three years of growth. Moreover, the use of formative assessment yields a .90 standard deviation gain to increase the use of feedback and support for students. Collectively, as educators become clear about the why of RTI, schools can employ effective practice strategies, allowing students to experience success on key concepts and skills and for those students who demonstrate a cognitive disability to receive specialized support, as afforded to them by national and state mandates.

Kauffman, J. M. The President’s Commission and the Development of Special Education. Education and Treatment of Children, Vol. 27, No. 4, November 2004.

Not too long ago, I was asked to write a piece about how leaders and teams can determine if they really are working in an accountable professional learning community. This is a real issue, as possibly the biggest roadblock to helping all students learn at higher levels and doing the work of a PLC is when an organization gets caught in “PLC Lite.” PLC Lite is defined by Dr. Richard DuFour and Dr. Douglas Reeves as “when educators rename their traditional faculty or department meetings as PLC meetings, engage in book studies that result in no action, or devote collaborative time to topics that have no effect on student achievement—all in the name of the PLC process” (DuFour and Reeves, 2016, p. 69). END_OF_DOCUMENT_TOKEN_TO_BE_REPLACED