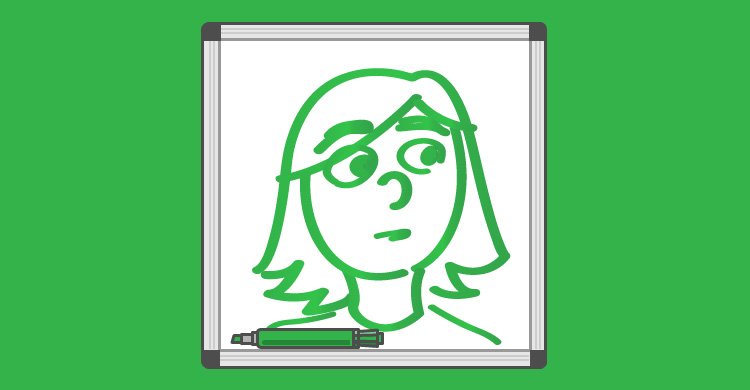 Ms. Noether informed her fourth graders that they would be using the dry erase boards to answer a series of questions on decimals. The students were seated in groups of four and one student from each group gathered all of the necessary supplies. When everyone was ready, Ms. Noether presented the first question:

Students began writing. I immediately saw a variety of answers such as 4 and 14 tens. I also noticed one student who seemed perplexed. Sheila began looking at her neighbor’s white board and wrote the same response on her own board. She had written the correct answer, 14 tens.

The next question asked was “How many tenths are in 14.6?” Sheila clearly had no idea and her first response when the question was posed was to look at her neighbor’s board. Rather than trying to make sense of the question by thinking about base ten blocks or reflecting on the first question and how the two questions might be related, Sheila became a freeloader. Her learning strategy was simply to look at what others were writing, copy the same values and claim them as her own. Sheila denied herself the opportunity to learn. She was also sending her teacher misinformation. Her teacher may have thought that Sheila understood simply because she had the right answer. A slight alteration in the structure of this lesson can change the dynamic and increase students’ accountability.

Ms. Noether presents the first question and then observes the students. On her signal, the students within each team compare their results. In this situation, Sheila might not have written anything on her board and she might have tried to look at her team members’ work. As the discussion begins, Sheila has a chance to see her team’s answers and more importantly she can hear their justifications for their answers.

In this second scenario, Sheila may not have understood the question, but she had opportunities to listen to her team’s insights. As the students were presented with other examples, Sheila would have a chance to consider what she heard from her team and then apply what she understood to new examples. When Sheila’s response was different than others in her group, she could receive immediate feedback. As her confidence increases, Sheila might begin asking questions and even show her thinking by using base ten blocks. With ongoing positive experiences, Sheila might select reasoning rather than looking as her strategy to learn.

In both scenarios Ms. Noether was working to check for student understanding during the lesson.  In the second scenario, however, she moved to designing the task to include formative assessment through feedback from peers.  Allowing students opportunities to share their understandings deepens the learning for both speaker and listener. In today’s mathematics lessons, students should be actively engaged in thinking, critiquing, analyzing, conjecturing, doing mathematics 65 % of the class period.

These opportunities enable students to deepen their understanding and build their sense of ownership. Students who their construct knowledge will never resort to “looking to learn.”

Kit Norris is an award-winning educator, consultant, and author who currently specializes in supporting teacher teams as they implement best practices in mathematics. As a former mathematics educator, administrator, and supervisor, she understands that teacher collaboration serves as a vehicle for improved student achievement.

Effective RTI in the classroom can seem overwhelming at times. As a current school leader, practitioner, and associate for Solution Tree, I am afforded the wonderful opportunity to work with educators, schools, and districts around the country. I am continually inspired by the commitment of the educators I work with and their sincere desire to improve. As I’ve visited schools and districts, I’ve noticed a common comment that occasionally arises while intervening in the classroom, which I’d like to refer to as the “if only” dilemma. END_OF_DOCUMENT_TOKEN_TO_BE_REPLACED