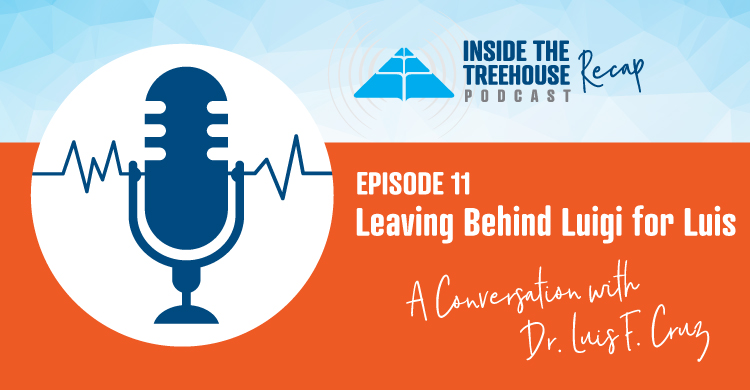 Captivating audiences everywhere with his charisma, you’ll be hard-pressed to find a more vibrant speaker and educator than Dr. Luis F. Cruz. Teacher, principal, writer, presenter…Luis has donned many titles over the years, but none compare to the one he holds now: cultural champion. Embracing his Latino heritage and diverse upbringing, Luis has pursued his passion for equity, making it his mission to ensure that students from underserved populations–and particularly English learners (ELs)–succeed.

Read on to discover how Luis went from playing in the parking lots in Los Angeles to leading the charge for lasting change in today’s education system.

A Soft Spot for Pico-Union

Diversity has always been part of Luis’s life. After all, he grew up in the Pico-Union neighborhood of L.A. (also referred to as the Ellis Island of the West Coast). With grandparents who moved to the U.S. from Ecuador and lived right down the street from him, Luis also has always had strong ties to his Latino roots. Even though the area was tough with many rival gangs, Luis kept his nose out of trouble thanks to parents who made sure he didn’t get caught up in destructive behaviors. With fond memories of caring neighbors and fun times playing in the parking lot with his friends, Dr. Cruz had a great childhood.

From first grade through high school, Luis attended Catholic schools and had many standout teachers over the years. It was his third-grade teacher that really helped solidify his identity. When Luis was struggling to master his English and going through what he calls the assimilation blues, she offered key words of encouragement. She told him that his gift of bilingualism meant that he would be twice as smart as others because he knew not one but two languages.

It was in high school that Luis first thought about his future. While his parents didn’t know much about college, Luis knew it was in his cards, so he started at a nearby community college. It was at this local college that Luis tapped into his writing skills, and thanks to amazing teachers, mastered the art!

When he took a field trip to Cal State Fullerton, he decided it was next on the agenda. Luis took the leap and moved away from home, and it was at Cal State Fullerton that he dove into Latino history, Chicano studies, and sociology. When a professor asked him to present to a group of visiting high school students, Luis reluctantly agreed. His speech was a hit! He had discovered a new talent.

From there, the rest is history. Luis began his career in the classroom. Besides earning master’s and doctoral degrees, Luis served as a teacher and administrator at the elementary, middle, and high school levels. It was during this time that he worked with a lot of ELs and students from underserved populations. Luis loved teaching and inspiring, but realized that unless institutions change on a schoolwide level, there wasn’t going to be lasting transformation. He saw the need for entire systems to change in order for these groups of students to be successful. Luis understood the power of creating equitable environments.

Along the way, he met Rick DuFour and learned about the PLC process. As his knowledge and hands-on experience with this process grew, he came to believe it could be used as a way to create equity as it offered solutions on how to respond systematically. He concluded that all students, regardless of cultural or economic background, have the opportunity to succeed with the PLC at Work® process.

A Boost for Bilingualism

Luis had found his niche. Shifting to presenting, coaching, and writing, he now has become an influential cultural champion. One of his latest projects with Solution Tree is Soluciones. This event, proposed by Luis, focuses on the challenges Latino students face, especially those who are ELs. Being bilingual is an asset in today’s world, so why do we view being an English learner as a deficit? For Luis, this event presents an opportunity to share insights and resources on transforming the system to one where ELs flourish. At Soluciones, Luis and other experts equip teachers and leaders with the components needed to make sure ELs succeed: great instruction, SEL, transformational leadership, and the parent-teacher partnership.

Besides inspiring and impacting future generations, Luis also shares some personal anecdotes and surprising facts about himself in this episode. For example, did you know he has been on America’s Funniest Home Videos? In fact, if you look really hard, you may even find him on TikTok!

Tune in to Episode 12 of Inside the Treehouse on April 9 and get ready for a fun chat with Dr. Tina H. Boogren.

Not too long ago, I was asked to write a piece about how leaders and teams can determine if they really are working in an accountable professional learning community. This is a real issue, as possibly the biggest roadblock to helping all students learn at higher levels and doing the work of a PLC is when an organization gets caught in “PLC Lite.” PLC Lite is defined by Dr. Richard DuFour and Dr. Douglas Reeves as “when educators rename their traditional faculty or department meetings as PLC meetings, engage in book studies that result in no action, or devote collaborative time to topics that have no effect on student achievement—all in the name of the PLC process” (DuFour and Reeves, 2016, p. 69). END_OF_DOCUMENT_TOKEN_TO_BE_REPLACED