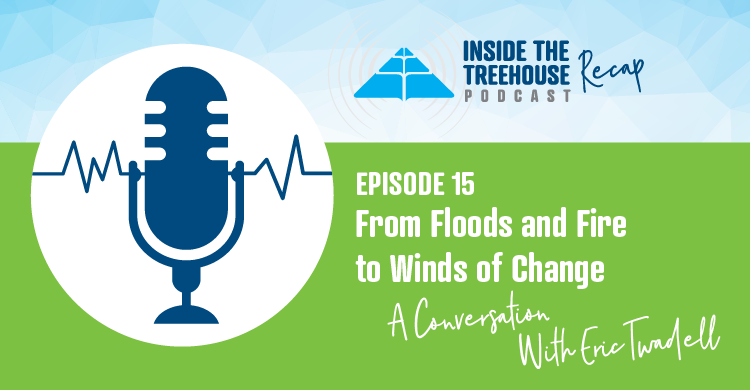 To the education field, Eric Twadell is superintendent of Adlai E. Stevenson District 125. But to the people closest to him, Eric is a proud husband and father, a former Boy Scout, an avid snow skier, and an enthusiastic Peloton user.

Read on to discover how an “average” student from Illinois became an education expert who brought change to one of the most recognized and celebrated schools in America.

An Average Student in Unique Circumstances

Eric grew up in Gurnee, Illinois, home of Six Flags Great America. He was an average student who struggled with math and science but loved sports. He had an interesting elementary school experience. Because his grade school was located on a flood plain along the Des Plaines River, he would be out of school for days at a time due to flooding.

His high school years, too, were a little unusual. In Eric’s sophomore year, a student—angry that a girl wouldn’t go to the winter dance with him—set the school on fire. For the rest of high school, Eric attended classes in an empty spare building, which a nearby school just happened to have available.

Developing a Love of Learning

Saint Joseph’s College, a small Catholic school in Indiana where Eric went for his undergraduate study, finally offered him the opportunity to become more than just an average student. The staff cared about each student’s individual achievement. Eric recalls one time he slept through part of a class—and woke up to a nun knocking on his door to check on him. He was never late to a class again.

It was during this time that Eric began to enjoy learning. He credits his amazing college experience and his instructors’ dedication to his success for turning him into more than just an “okay” student and shaping his path forward.

After finishing college, Eric intended to take a gap year to study for the LSAT before going on to law school. But deeper reflection into his interests and the possibilities for his future caused him to consider a career teaching high school instead, which after returning to college for his master’s degree, is exactly what he did.

After completing his student teaching experience, Eric experienced the stress of trying to secure a full-time position. He put in hundreds of applications, but it was due to his persistence that he was able to make a connection with Adlai E. Stevenson High School. He called repeatedly and begged for a chance to speak to the director of social studies. Within a week, he was hired as a social studies teacher.

Five years later, Eric became the director of social studies at Stevenson. Previously, he’d had no aspirations for leadership, but after spending time with Rick DuFour and Tim Kanold in various trainings, he discovered he really enjoyed the conversations they were having about leadership and continuous improvement. From there, he found himself wanting to learn more from Rick and Tim, and eventually he followed in their footsteps to become the superintendent at Stevenson.

In the years between joining the staff of Stevenson and becoming superintendent, Eric witnessed a great deal of change. Not only did the number of students double, but the building itself expanded, more courses and elective opportunities were added, and staff collaboration—the hallmark of a PLC—grew even more firmly embedded into the school’s culture. The school became more supportive and nurturing of both students and educators, leading to higher levels of learning and achievement.

Eric remains the current superintendent of Stevenson, making him the longest-sitting superintendent in the school’s history. He is proud to say the population is more diverse now than ever before, and he is dedicated to providing students with the most rich on-campus experiences possible. He also led a multiyear process to transform special education, creating new on-campus programs and ensuring the success of all students at Stevenson.

Although Eric has seen a lot of change over his time at Stevenson, one thing that hasn’t changed is the expectation for collaboration and continuous improvement that has led Stevenson to becoming one of the most recognized and celebrated schools in America.

New Episode Coming Soon
Tune in to a special bonus episode of Inside the Treehouse on June 4. Get ready for an exciting conversation with Mike Mattos and Anthony Muhammad.

Not too long ago, I was asked to write a piece about how leaders and teams can determine if they really are working in an accountable professional learning community. This is a real issue, as possibly the biggest roadblock to helping all students learn at higher levels and doing the work of a PLC is when an organization gets caught in “PLC Lite.” PLC Lite is defined by Dr. Richard DuFour and Dr. Douglas Reeves as “when educators rename their traditional faculty or department meetings as PLC meetings, engage in book studies that result in no action, or devote collaborative time to topics that have no effect on student achievement—all in the name of the PLC process” (DuFour and Reeves, 2016, p. 69). END_OF_DOCUMENT_TOKEN_TO_BE_REPLACED