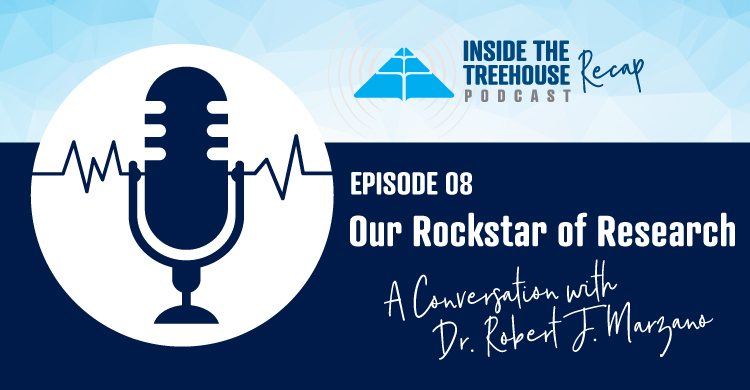 While you may know Dr. Robert Marzano for his contributions to educational research, there’s so much more than meets the eye. Sure, he has more than 50 years of experience, 50 books published, and over 200 articles written, but did you know he was in a movie with Elvis, joined a monastery, and has two black belts?

Well-versed and well-read, there’s no one with a better grasp on today’s educational climate than Dr. Marzano. Here’s a glimpse into his life-long career in the field and how he got there:

Moving Around and Monastery Life

Growing up, Marzano was a Navy brat, switching schools at least seven times through his elementary and middle school years. Marzano also had a bad stutter. Neither of which favored his academic success. Looking back, he believes it was one influential elementary teacher who really turned things around, giving him the confidence to no longer be held back by his speech disorder.

Marzano attended high school in Seattle (yes, there was only one). During his teen years, Marzano was a jock, playing basketball, football, and baseball. Although if you ask him, he’d say basketball was by far his favorite.

After high school, Marzano’s path took an interesting turn. He joined a monastery in New York. Although this monastery was a teaching order which required no vow of silence, Marzano did spend four years fairly cut off from the world. While there, he earned his undergraduate degree from Iona College. He even had college classes with singer Don McClean!

At age 21, Marzano left the monastery to get married, moving back to Seattle. Not long after his return, he had to backtrack to New York to earn his emergency licensure in education. This included a one-year stint at an all boys vocational high school. Little did Marzano know that he was the one to break a teachers strike, making his first year in the classroom and cafeteria filled with cold shoulders from his colleagues.

After a rough year in New York, Marzano crossed the country again, returning to Seattle where he taught at his old high school. During this time he finished his master’s degree, which was when he got hooked on academics and research. The obvious next step was to pursue his PhD.

There was a catch though. The University of Washington required him to be a full-time student. With a wife and kid, Marzano needed an income, so he became a TA, which according to him was nothing more than a glorified gopher. That was until one professor gave him the chance to fill a role in a government-sponsored program. Free tuition and a salary bump…Marzano took it!

After earning his PhD, Marzano landed at the University of Colorado Denver.

The Road to Research

So how exactly did he go from higher education to the research lab?

One day Marzano got a call from a regional education lab asking him to come work. Of course, Marzano’s answer was yes. He stayed there for years doing pure applied research, collecting and analyzing data and publishing reports for the U.S. Department of Education.

When he realized the power of turning theory into practice, Marzano began writing books for educators instead of writing research papers. One project for the Department of Education was to look at the research on classroom instruction, which led to his first real blockbuster: Classroom Instruction That Works.

While he greatly enjoyed his time at the lab, the work became too restrictive. Marzano needed freedom to make independent decisions rather than working in the confines of a group. He left and went on his own, continuing to research, consult, and write.

In 2007, he was invited to speak at a conference by Solution Tree. After the conference, he went to dinner with Solution Tree CEO Jeff Jones, who point blank asked Marzano what he really wanted in life. Marzano’s answer: to have his own research lab. Without batting an eye, the two made it happen. Marzano was the brains; Solution Tree was the brawn. Marzano Research was born and sealed with a handshake.

It was a few years later that Marzano called Solution Tree with a proposition — buy the other half of the company. Jones agreed, but only if Marzano himself stayed on as an employee. Thus, Marzano became Chief Academic Officer of Marzano Resources and a beautiful, new partnership was formed.

What To Expect Next

With such depth of experience and a keen eye for the future of the field, Marzano believes that we can all expect a shift to competency-based education. If anything, COVID has only sped up the process. A system where students move as quickly or slowly as they can through the content based on their own learning is what Marzano predicts to be the predominant mode of instruction ten years from now. Teachers are already working in a more competency-based manner due to remote teaching and distance learning.

It’s undeniable, Dr. Robert Marzano is an education legend. That’s why he is and always will be our rockstar of research! No one has a better brain for education or has stayed consistent for so long. Like Jeff Jones says we can all hope there’s “a lot of run left in those legs.”

Episode 9 of Inside the Treehouse will be available on February 26, and will feature Cassandra Erkens. Tune in for a great conversation with a great gal!

Not too long ago, I was asked to write a piece about how leaders and teams can determine if they really are working in an accountable professional learning community. This is a real issue, as possibly the biggest roadblock to helping all students learn at higher levels and doing the work of a PLC is when an organization gets caught in “PLC Lite.” PLC Lite is defined by Dr. Richard DuFour and Dr. Douglas Reeves as “when educators rename their traditional faculty or department meetings as PLC meetings, engage in book studies that result in no action, or devote collaborative time to topics that have no effect on student achievement—all in the name of the PLC process” (DuFour and Reeves, 2016, p. 69). END_OF_DOCUMENT_TOKEN_TO_BE_REPLACED