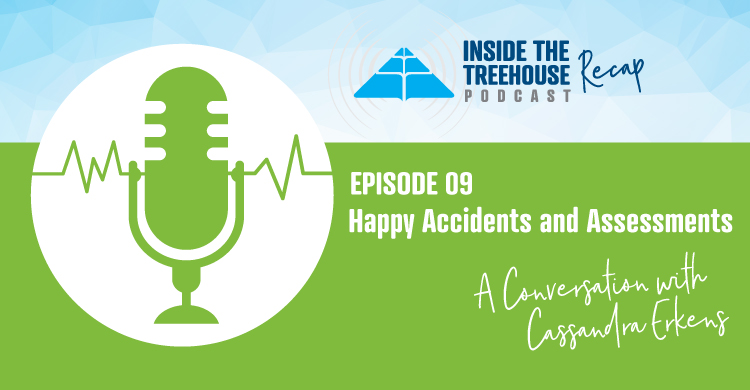 From facilitating workshops to finding innovative solutions, Cassandra Erkens embodies a true teaching professional. As a founding member and leader of the Solution Tree Assessment Center, Cassie is all about reinventing the assessment wheel. But, did you know that she also has three kids, owns a collection of traveling treasures, and even shoots the occasional potato gun?

Read on to discover her story and some fun facts about Cassandra Erkens!

Erkens never planned on becoming a teacher. But, like so many others, it was one educator who made all the difference. A straight A student, Erkens never had to worry about getting bad grades and rarely even felt challenged. That was until her senior year when a teacher gave her a C- on a writing assignment. As Cassie likes to say, this particular educator “took her to school,” changing her outlook on education and teaching her what it meant to truly learn.

That was all it took. The imprint was made and Erkens went off to college to become an English teacher. Everything since then, according to Erkens, has been a series of “happy accidents.”

After college, Erkens worked in a small high school with a unique dynamic. Teachers were either seasoned veterans or total newbies. With no guidance from her elders, it was sink or swim.

Luckily for Cassie, she could tread the water and over time mastered her skills. However, the principal of this particular school was notorious for getting rid of the most powerful female voice each year. Erkens knew she had it coming, so she positioned herself as the union president. After a bit, Cassie decided it was time to move on, slipping out unscathed.

Because of her position, Erkens was able to hand pick the school district in which she wanted to work. Her choice? Eden Prairie. Working in staff and organization development in the central office, Cassie came to love the district, its schools, and the team she worked with. For five years she stayed at Eden Prairie, which she calls her “Camelot.”

A Place to Hang the Hat

After working hard to promote collaboration at Eden Prairie and succeeding, Erkens became director of a statewide grant with the mission to grow collaboration on the state level. While she had planned for a three year contract (the perfect amount of time to build her own business), it only lasted one.

This left Erkens without a job and a family to feed, so she decided to connect with several education companies for contracting opportunities. After putting out her feelers, Erkens decided there was only one place to hang her hat…Solution Tree.

The Crown Jewel of Assessment

The part of Cassie’s story that we haven’t touched on yet is her affinity for assessment. It all began in the classroom. There was a major gap in what she learned about assessment in college compared to the amount of assessment work she was actually doing as a teacher. Erkens knew something had to be done so she went deep into the rabbit hole: reading, attending workshops, constantly trying to innovate. She became a student of assessment first. Her role as student gradually shifted to teacher as she began to discover effective ways she could help her fellow educators.

In her eyes, assessment is ever-changing and often affected by legislation. Nowadays her team at the Solution Tree Assessment Center (which she helped create), is committed to rethinking the assessment process. She thinks assessment can be used to increase achievement, rather than just document it. Erkens believes assessments should be leveraged as an inspirational tool to instill hope and efficacy, as well as to change the trajectory of the student.

Looking Into the Crystal Ball

For the future, Erkens foresees the need for educators to be far more sophisticated about how, what, and when they assess in order to lessen the growing achievement gap. She also hopes there’s a shift to a more competency-based model of assessment and performance-based testing.

Fun Facts and A Nugget of Knowledge

Outside of education, Erkens is a mother of three and recent grandmother for the first time. Besides a new addition to the family, all three of her kids bought new digs this year, making 2020 the year of houses. As for the potato gun we mentioned earlier…a fond family memory from the past.

Something else you may not know about Cassie is her impressive jewelry collection. Being on the road so much for work means the chance to stock up on momentos from her travels. Erkens strives to make her souvenirs memorable. Each time she visits a city, she gets out, visits a local jeweler or artist, and picks up some original accessories. That way she can always remember the city, schools, and people she’s experienced each time she wears her gems.

So, what’s Erkens one piece of advice to educators who are making use of virtual tools today?  Keep it simple. Connect to who you are talking to and what they need in that moment. Wise advice from a wise woman. Cheers to Cassie!

Episode 10 of Inside the Treehouse will be available on March 12, and will feature Solution Tree’s very own Vice President of Professional Development Shannon Ritz.

Not too long ago, I was asked to write a piece about how leaders and teams can determine if they really are working in an accountable professional learning community. This is a real issue, as possibly the biggest roadblock to helping all students learn at higher levels and doing the work of a PLC is when an organization gets caught in “PLC Lite.” PLC Lite is defined by Dr. Richard DuFour and Dr. Douglas Reeves as “when educators rename their traditional faculty or department meetings as PLC meetings, engage in book studies that result in no action, or devote collaborative time to topics that have no effect on student achievement—all in the name of the PLC process” (DuFour and Reeves, 2016, p. 69). END_OF_DOCUMENT_TOKEN_TO_BE_REPLACED