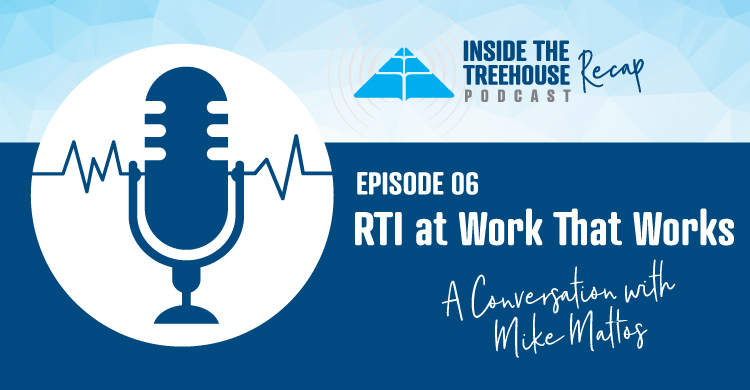 Inspired by the concept of collaboration, Mike Mattos saw an opportunity to help students who had fallen behind. In partnership with Austin Buffum, Mattos developed the system for which he’s known best, Response to Intervention at Work

During Episode 6 of Inside the Treehouse, Solution Tree CEO Jeff Jones sat down with Mattos to discuss his upbringing, his education, his career, and of course, all things RTI.

Go to School. Get Smart.

The story of Mike Mattos starts in a small town in the high desert of California called Twentynine Palms. Growing up, Mattos received a wonderful education through the public school system. In fact, since his hometown was so small, he graduated with most of the same classmates he had been in school with since kindergarten.

His love for education comes from the constant echo in his ear: “go to school” and “get smart,” two phrases repeated to Mattos by his parents and grandparents. His grandfather only had a third grade education and his grandmother only an eighth grade one. After building their life through sweat equity, Mattos’s grandparents understood the importance of getting an education. While Mattos’s father made it through high school, that was it. A successful insurance agency owner, his dad constantly pushed him to continue learning and even to go to college, making Mattos one of the first in his family.

For Mike’s parents, college was so important that they cashed in their life insurance policy just to get him there. Impactful teachers along the way helped guide Mattos as well.

Mattos had always planned to return home after college to take over his dad’s business. That all changed when he took a class that required him to assist in a sixth grade classroom. Mattos loved it and knew it was his calling. The next semester he switched majors and the rest was history!

So how did Mattos get from there to pioneering the RTI at Work process? Mattos attributes it to the influence and mentorship of Rick and Becky DuFour, Bob Eaker and the PLC model in general.

Spending the biggest chunk of his career in the classroom as a teacher, Mattos began to notice some recurring themes, as well as effective ways to address them. Most of which he noticed, such as the power of collaboration, leveraging the expertise of his colleagues, focusing on what students need for future success, and that some kids need extra support, mirrored PLC at Work key concepts. While this system didn’t exist when Mattos was in the classroom, his intuitive findings were later validated.

Mattos first heard the term “PLC” as a principal at a conference led by the DuFours. It all clicked. The things Mattos heard, he had already experienced.

After implementing the PLC at Work process in his school and seeing it succeed, the DuFours returned to Mattos’s school and asked him to sit with him on a panel. Later, Mattos was asked to become a Solution Tree associate and fell under Rick DuFour’s personal mentorship.

RTI at Work Is Born

As Mattos moved forward in his career, he found his niche…intervention. He realized he was most passionate about helping the kids who weren’t making it. To this day, Mattos believes that when you commit to the word “all,” you commit to extra help.

He knows firsthand, as he suffered from a speech impediment growing up. Not only did this affect his confidence, but it also took a toll on his spelling and writing abilities. It was by luck that he got the right teachers in the fourth and fifth grade to help him through. Mattos believes students shouldn’t depend on luck, but rather a systematic approach where extra help is inevitable so that it is impossible for kids to fall through the cracks.

Mattos first met Austin Buffum, co-creator of RTI at Work, at a Solution Tree event in 2002. While talking about RTI, Buffum, who was a superintendent at the time, asked Mattos if his teachers would need to give up their PLC processes to implement RTI. Mattos explained that these two models go hand-in-hand and that he used the four critical PLC questions to drive collaboration around systematic intervention. Buffum was on board. RTI at Work was born.

Even with many years of experience under his belt, Mattos has never faced a challenge quite like the pandemic before. He believes the benefits of virtual learning haven’t equally benefited all students, especially those from lower-income households. This is partially why Mattos has turned his recent attention to the growing student achievement gap.

Despite the hardships, Mattos applauds educators, whose ability to pivot quickly has revealed the dedication and character of the profession. Mattos reminds us of some silver linings from the whole ordeal that show hope for the future. Teachers realized they can collaborate remotely. There is more urgency to help students falling behind. Educators are sharing best practices more openly. Students are learning how to navigate a virtual world. While it has been a difficult year for everyone, Mattos knows educators and students have benefitted and will continue to leverage new skills developed during the pandemic.

An example of what hard work and education can do, Mike Mattos has contributed greatly to the field of education. We can all look forward to seeing how he will impact the world next!