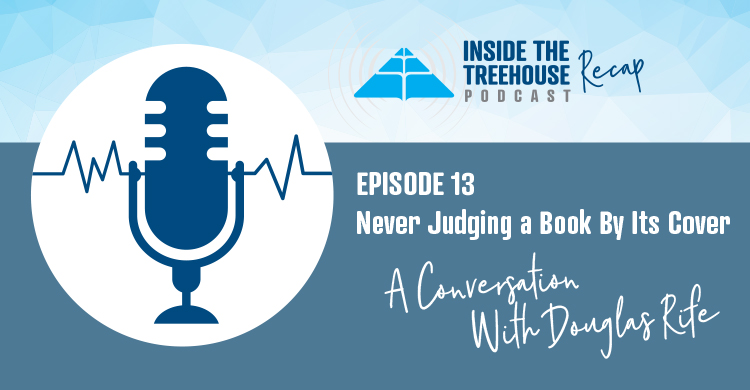 With 46 years in the publishing industry, Solution Tree publisher Douglas Rife is no stranger to the book biz. Besides heading up our press efforts, he’s also president of Solution Tree International, an avid blogger, published author, and gravestone aficionado.

Beginning a Career in Publishing and Writing
Mr. Rife’s career in publishing began 46 years ago while he was still in high school. He began working at a local publishing house, Perfection Form (now called Perfection Learning). Working in the warehouse, he later moved on to the computer room, and then the art department. But it wasn’t until his boss, Wayne DeMouth, a former English teacher, took an interest in his writing skills that he made the life-changing step to become an editor. Mr. DeMouth encouraged him to go to college, and he did. After graduation, Mr. DeMouth hired him as an editor, launching his career and teaching him the ins and outs of editing and writing.

Today, Mr. Rife is not only the president of Solution Tree International, but he’s also is a prolific author, with 26 books in print. His current work in progress, “We Buried Dad in a Leisure Suit,” retells the story of his dad’s life, interwoven with his own.

Appreciating Hidden Stories as Cemetery Blogger
Beyond writing and publishing books, Mr. Rife is also an avid blogger, recently publishing his 1,000th post. In his blog, “Gravely Speaking,” he focuses on telling stories related to gravestones, graveyards, sculptures, gravestone symbols, architecture of mausoleums, and the individuals buried there. He regularly haunts cemeteries, and possesses a collection of about 300,000 photos documenting the subject matter.

His interest in cemeteries started when he and his dad would decorate the graves of five generations of family members in Little Sioux, Iowa. His dad would tell stories about his family buried there, and it sparked an interest. He found that there’s much to discover and appreciate in graveyards. In fact, some of the world’s greatest artists have produced beautiful work in cemeteries, such as Daniel Chester French, who sculpted the Lincoln statue inside the Lincoln Memorial in Washington, DC.

Family Stories and Interesting Characters
Growing up, Mr. Rife’s family provided him with plenty of inspiration—not always good—but always interesting. For instance, his dad was a plasterer and taught him a strong work ethic. His dad never missed work—even the time when he fell off tall scaffolding, he still went to work the next day. As a child, Mr. Rife used to write letters to his uncle in prison, who once stole a sheriff’s hat and then was caught wearing it! His uncle always had the most entertaining, outrageous stories to share. “I like all the names and dates and finding out where people come from, but it’s the stories that puts the flesh on the family history,” Mr. Rife explains.

Changes in Publishing
Over the course of four and a half decades, Mr. Rife witnessed massive changes in publishing. First, there are no longer book clubs that sell books in batches to teachers. That was a major shift in how books were sold. Second, there used to be a network of teacher stores, but most of those stores are gone now. Third, the rise of the internet and online sales has changed the market. Fourth, technology has changed and everyone can use computers to work on publishing projects. Fifth, some new education topics have emerged, such as well-being and teacher care. Sixth, there was a huge consolidation of the marketplace in the 1980s and ’90s. Smaller companies were purchased by bigger and bigger publishers.

Book Covers Were and Still Are Important
Back before online book sales took off, Mr. Rife would research people in stores using what he calls the flip test—if a customer spent at least 15-20 seconds looking at a book, then they’d likely buy it. One thing he would tell designers, “Never judge a book by its cover, unless you want to sell books.” The cover is the billboard for the book.

The Solution Tree Difference
Mr. Rife reflects on some of the things that make Solution Tree special from other publishers. A hallmark of Solution Tree is that it’s where research and practice intersect. It relies on research but delivers it in a way that teachers can immediately begin using in the classroom. Another hallmark is the marriage between what the author has written and the platforms on which they can share their messages, such as through events and professional development courses, making it easier to help educators. This reflects Solution Tree’s mission: advance the work of our authors.

Having a varied background in publishing, Mr. Rife values that Solution Tree focuses on fewer books—quality over quantity. Jeff Jones, Solution Tree CEO, once told him he didn’t care if he only published one book a year, as long as it was the right book. When you find the right authors, everything falls into place.

New Episode Coming Soon
Tune in to Episode 14 of Inside the Treehouse for a heartfelt conversation with national thought leader and award-winning educator and author, Timothy D. Kanold.

Not too long ago, I was asked to write a piece about how leaders and teams can determine if they really are working in an accountable professional learning community. This is a real issue, as possibly the biggest roadblock to helping all students learn at higher levels and doing the work of a PLC is when an organization gets caught in “PLC Lite.” PLC Lite is defined by Dr. Richard DuFour and Dr. Douglas Reeves as “when educators rename their traditional faculty or department meetings as PLC meetings, engage in book studies that result in no action, or devote collaborative time to topics that have no effect on student achievement—all in the name of the PLC process” (DuFour and Reeves, 2016, p. 69). END_OF_DOCUMENT_TOKEN_TO_BE_REPLACED