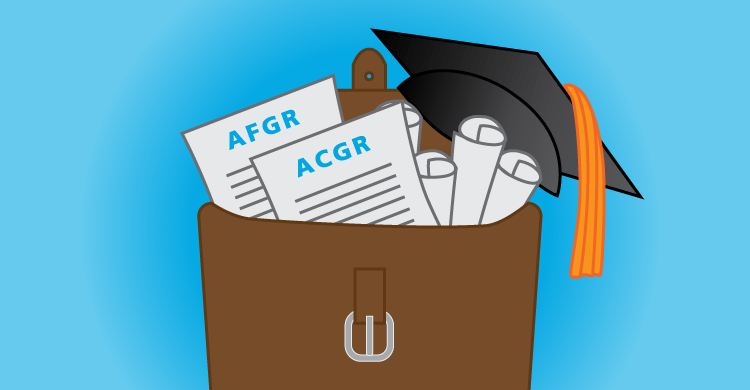 Before discussing the actual data, it is important to understand how graduation rates are calculated. There are two main methods: the Average Freshman Graduation Rate (AFGR) and the four-year Adjusted Cohort Graduation Rate (ACGR).

The ACGR is the most accurate statistic, but the AFGR can be estimated for the past 50 years, making it highly useful for comparisons over time. It is important to note that both methods fail to include students who are not dropouts, but who are also not considered on-time completers (i.e., students who repeat a grade, students who earn an alternative credential, and students enrolled in diploma/AA degree programs which often require more than four years to complete). Thus, the dropout rate is not merely the graduation rate subtracted from 100%, as it is often erroneously reported.
What may not be obvious is how the often the two calculations differ from each other, as seen in the two charts below (data from Stester and Stillwell, 2014. For full data charts, see U.S. Department of Education).

Even within states, the two measures often differ widely, with some states having nearly the same graduation rate in each measure (see VA and MO), while others have differences of 10 or more percentage points between measures (see DC and OR).

Comparison of AFGR and ACGR Percentages at State Level

Whether you use AFGR or ACGR rates, it is clear that the national high school graduation rates have improved. Building a Grad Nation reports that for the first time the national ACGR is at 80%, with many states on track for reaching 90% graduation rates by 2020 (Balfanz, et al., 2014). Of the 3.8 million students who began high school as freshmen in 2008, 20% (or 760,000) failed to graduate on time. In some articles, I have seen the statement, “3/4 of a million students dropped out in the class of 2012,” which is inaccurate. That 20% includes students who are in GED programs, students who earned alternate diplomas, students who are earning an alternate degree, and students who may take five or six years to graduate instead of four (Diplomas Count, 2014).

In most parts of the US, a Native American, Hispanic, or African American child still has a much lower probability of graduating on time than a white or Asian American child. A child living in poverty has a lower probability of graduating, as does a child who is learning English as a second language or a child with learning difficulties. The good news is since 2002 there are 200 fewer dropout factories (schools with graduation rates below 60%), which means nearly 450,000 fewer low-income and minority students are attending schools where they have a 50/50 chance of graduating (Balfanz, et al., 2014). Unfortunately, our nation still funds over 1,300 dropout factories and low-income and minority students—especially young men of color—still graduate at rates under 60% in most urban schools (Balfanz, et al., 2014).

What is perhaps most sobering about the dropout crisis are the potential life outcomes for dropouts—approximately 15% of the adult population. In Child Trends (2014) data from 2011, two items stand out: dropouts are not eligible for 90% of the jobs available and dropouts commit 75% of US crimes. These statistics paint a stark picture; dropouts, who have very limited job opportunities, commit three of every four crimes.

With statistics like these, it is hard to know where to begin working toward solutions. Reports on the dropout crisis from groups like America’s Promise, Building a Grad Nation, Achieving Graduation for All, and Diplomas Count share strategies for increasing attendance and achievement in high schools. There is an amazing degree of commonality in the solutions offered and implemented by these and other groups—including the elevation of social and emotional components to parallel importance with academic and disciplinary components. Increasingly, students’ needs for belonging, optimism, hope, pride, and purpose are being discussed. Leaders and decision makers realize that students are more likely to stay in school when they feel they belong there, and they are more likely to graduate and continue on to careers and college when they have a guiding purpose for their lives and schooling. Transforming the high school experience for students and teachers requires this emphasis on social and emotional learning. Students need a Culture of Hope!

Not too long ago, I was asked to write a piece about how leaders and teams can determine if they really are working in an accountable professional learning community. This is a real issue, as possibly the biggest roadblock to helping all students learn at higher levels and doing the work of a PLC is when an organization gets caught in “PLC Lite.” PLC Lite is defined by Dr. Richard DuFour and Dr. Douglas Reeves as “when educators rename their traditional faculty or department meetings as PLC meetings, engage in book studies that result in no action, or devote collaborative time to topics that have no effect on student achievement—all in the name of the PLC process” (DuFour and Reeves, 2016, p. 69). END_OF_DOCUMENT_TOKEN_TO_BE_REPLACED