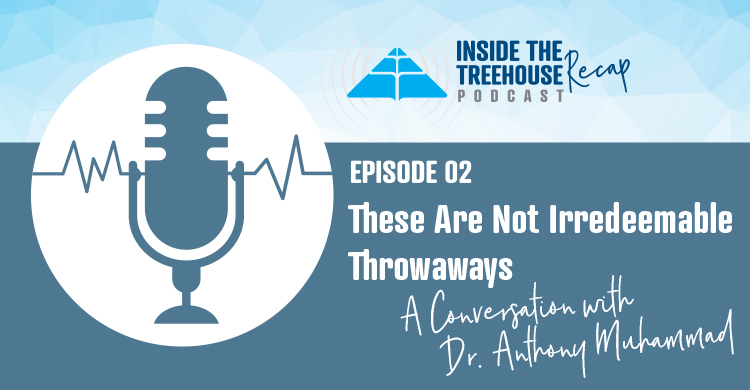 A conversation about all things education…anytime, anywhere!

Besides information and insights on trending topics in the field, our new Inside the Treehouse podcast provides an inside look into the lives of some of the greatest minds in the profession. All of this and more at your fingertips. (Or, should we say in your ears.)

Episode 2 of our podcast featured Transforming School Culture architect Dr. Anthony Muhammad. In this episode, Muhammad talks about his childhood in Flint, Michigan; striving to get ahead in his education career; and the often stark realities of being an educator during challenging times.

Growing up, Dr. Muhammad lived in a household where education mattered. His mother, a teacher, always placed a high importance on grades. Her expectations for Anthony’s success were equally as high. When the sports team set a certain GPA requirement, his mom made his one grade level higher. Despite this, Dr. Muhammad wasn’t an overachiever. He simply did what was required. Nothing more, nothing less. He was compliant. While he was a good student, this compliance led to some gaps in his education, particularly in math.

After graduating high school, Anthony left Flint and moved to East Lansing, where he attended Michigan State University to run track. Going into college, Muhammad had hopes of being an accountant because of an inspiring high school teacher. This, however, didn’t quite work out as he had hoped. Those math gaps came back to haunt him, as Muhammad couldn’t hack the advanced math classes in college. While it wasn’t his plan, it was a blessing in disguise. Muhammad made the move into the field of education.

After college, he started teaching at Rich Middle School in Lansing. As one of only five African American male teachers in Michigan under the age of 25 at the time, Muhammad described himself as a “unicorn.” And, as a unicorn, he got to pick exactly where he wanted to begin his career.

Rather than the easy road, Muhammad wanted to be put in the toughest place possible. Growing up, he had seen classmates fall through the cracks. He wanted to change that. He settled on Rich, a typical urban middle school. There, he taught seventh-grade social studies, loving every minute of it.

Muhammad’s next step was into administration. A reluctant but necessary move at the time, as his salary as a teacher couldn’t keep up with his expenses as the father of six children.

After serving as a middle school assistant principal for two years, Muhammad was promoted to principal for three years in a charter school in Lansing. It was after this that he made his way to Levey Middle School in Southfield, Michigan

At Levey, Muhammad’s true entrepreneurial spirit began to shine. Two such innovative ideas that Dr. Muhammad dreamt up and developed were the Levey Dollar Store, an extracurricular that taught kids the art of sales, and the Hip-Hop Literacy Program, where students produced, performed, edited, and distributed academically based music.

The same way Dr. Muhammad got into administration, he began his adventure into the PLC world: reluctantly. While at Levey, his superintendent sent out a memo telling all district administrators they were required to attend a PLC at Work® Institute in Lincolnshire, Illinois. Listening to keynotes by PLC architects, including the late Rick DuFour, Muhammad’s reluctance turned into curiosity. By day four of the institute, Dr. Muhammad was a convert.

At the event, Muhammad approached Rick DuFour to ask for additional advice, but also to mention the lack of minority representation. The response Muhammad got from DuFour came as a shock. Rick put the ball back in Muhammad’s court, asking what he planned to do about it. DuFour also told him that if he went back to Levey and proved that the PLC process works in high-minority-population schools like Muhammad’s, that he would give Muhammad a platform to share his story. For the next year, DuFour and Muhammad corresponded and saw good results.

Besides being a best-selling author, breakout session leader, and keynoter, Dr. Muhammad has now started the Culture and Achievement Institutes through Solution Tree. For Anthony, these institutes are all about carrying on a legacy and building capacity among people. Learning from DuFour, Dr. Muhammad knows that the movement has to live on beyond you.

The issue of culture became so big for Muhammad that he realized he couldn’t do it by himself. At these institutes, he’s able to groom new talent, so that his work can continue through others. Now, he has a budding group of associates adding to the literature.

Muhammad believes that we are only as powerful as the people who paved the way for us, and that we all have an obligation to pave the way for others.

A Word of Advice

Dr. Muhammad’s wisdom also can be heard in his advice for today’s educators. Muhammad sees the new social justice movement as being more exposed than ever before. People are paying more attention and seeing things through new eyes. He encourages all of us to take advantage of this social clarity. Today’s technology has forced us to live up to our creed because now we can no longer hide.

Currently, Muhammad has two new projects in the works. One is co-authoring the second edition of Revisiting PLC at Work with Dr. Bob Eaker and Mike Mattos. The other is just getting rolling. Muhammad is joining forces with Dr. Douglas Reeves to write about the response to racial and social equity around student voice, a universal acknowledgement that systemic discrimination does exist.

The Future of the Field

Muhammad’s sentiments regarding education funding can also be heard loud and clear in the episode. He sees education as critical to national security, our economic future, and the security of our society at large. Instead of funding cuts, Muhammad believes we should be incentivising the best and brightest to become teachers.

Through wisdom and innovation, Dr. Anthony Muhammad has become one of the most well-respected PLC and cultural champions of today.

Our Next Episode is Available Soon

Episode 3 of Inside the Treehouse will be available on November 6, and will feature Dr. Douglas Reeves. Listen as he talks about his personal and educational path to becoming a prolific author, mentor, educator, and speaker.

Not too long ago, I was asked to write a piece about how leaders and teams can determine if they really are working in an accountable professional learning community. This is a real issue, as possibly the biggest roadblock to helping all students learn at higher levels and doing the work of a PLC is when an organization gets caught in “PLC Lite.” PLC Lite is defined by Dr. Richard DuFour and Dr. Douglas Reeves as “when educators rename their traditional faculty or department meetings as PLC meetings, engage in book studies that result in no action, or devote collaborative time to topics that have no effect on student achievement—all in the name of the PLC process” (DuFour and Reeves, 2016, p. 69). END_OF_DOCUMENT_TOKEN_TO_BE_REPLACED